Setting up the Rostelecom remote control for a TV: manual and automatic


Good day! My congratulations, dear friends, because you have become the proud owner of a remote control from Rostelecom. Today we will talk about setting up this miracle. The problem is that this contraption at the very beginning does not want to turn on or off the TV, but generally at least somehow respond to normal operation. That is why I wrote more detailed instructions for setting up the remote control from Rostelecom. Let’s look at three ways to synchronize. If you have any questions or additions, then write about them in the comments.

Before proceeding with setting up the Rostelecom remote control for the TV, let’s get acquainted with its keys. I advise you not to skip this chapter, as we will use many buttons in the future to configure your screen. 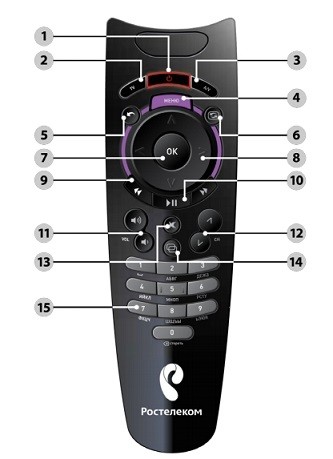 As the manufacturer indicates, the remote control from Rostelecom is a universal device that can be controlled both by the set-top box itself and the TV. Linking the Rostelecom remote control to the TV is done in several ways:

ATTENTION! If one of the methods does not work, then you can always use another or reset the current setting to the factory settings (I will write about this below).

If in the end nothing happened, and the TV did not turn off, then proceed to manual input in the next chapter. 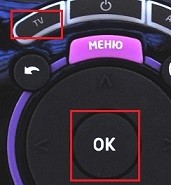 Table of codes for the Rostelecom remote control for TVs: 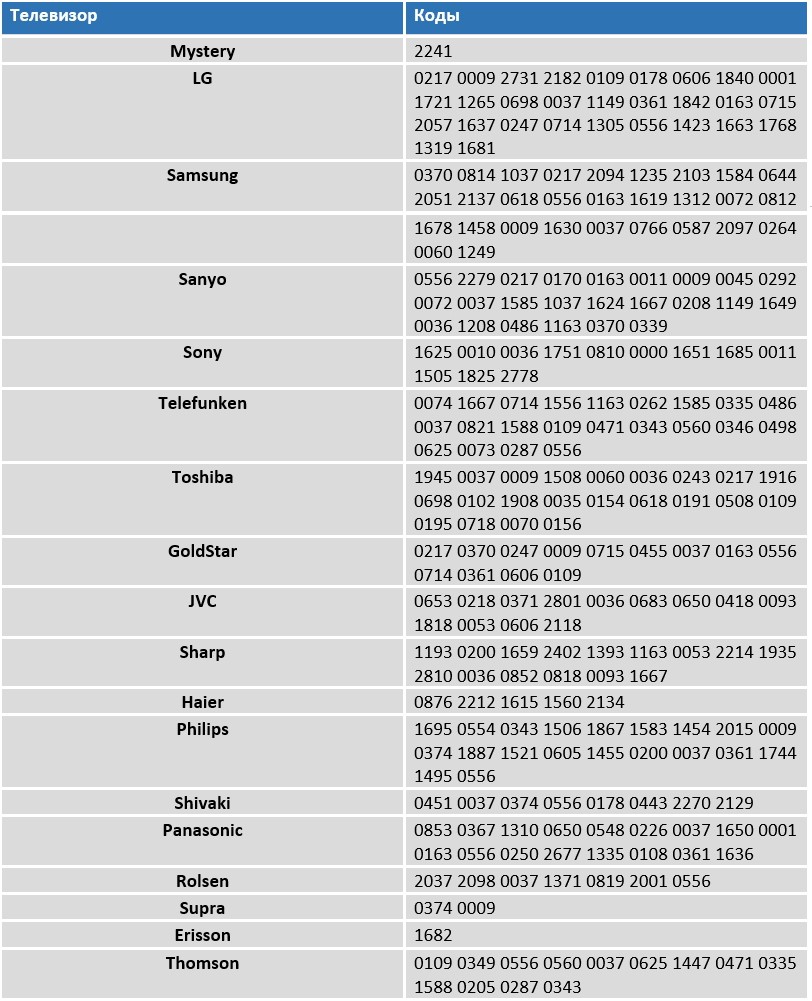 If you did not find your manufacturer in the table, you can look in our code directory below.

NOTE! Unfortunately, not all TV brands are presented in the table. For example, for DEXP boxes it is better to do automatic setup.

If you couldn’t find your remote control code, you can try offline setup. In this mode, the Rostelecom remote control will try to find the optimal code in its memory.

If something went wrong, some errors appeared, or the TV and set-top box live their own lives, then you can reset the Rostelecom remote control and do everything from the very beginning. To do this, follow this simple step-by-step instruction:

Loading ...
Recent Posts
Categories
You may also like
7 Ways Hackers Find Passwords, Bank Card PINs, and Personal Data – How to Protect Yourself
The development of digital technologies has led to
034
Video intercom with Wi-Fi – Internet technologies on guard at home
A modern video intercom with Wi-Fi makes it possible
021
How to find out the IP address of another person’s computer using Grabify IP Logger
If you need to calculate the location of a person (or
040
Humidifier Soar J37 from Svetofor: overview and problem solving
Friends, today I have a “deshman” humidifier Soar J37
050
How to deactivate the Google Play Protect feature that slows down your phone
It happens that Google Play Protection slows down on
044
Do-it-yourself Wi-Fi signal amplifier: diagram, drawing, instruction
Hello, dear friend! Before we proceed to consider a
053
Did you know that you can ask Google for the data that they personally dug up on you: instructions
Did you know that you can request the data from the
062
Smart light bulbs: how they work, an overview of interesting models
Smart light bulb is a new development branch of conventional
070
We use cookies on our website to give you the most relevant experience by remembering your preferences and repeat visits. By clicking “Accept”, you consent to the use of ALL the cookies.
Do not sell my personal information.
Cookie SettingsAccept
Manage consent

This website uses cookies to improve your experience while you navigate through the website. Out of these, the cookies that are categorized as necessary are stored on your browser as they are essential for the working of basic functionalities of the website. We also use third-party cookies that help us analyze and understand how you use this website. These cookies will be stored in your browser only with your consent. You also have the option to opt-out of these cookies. But opting out of some of these cookies may affect your browsing experience.
Necessary Always Enabled
Necessary cookies are absolutely essential for the website to function properly. These cookies ensure basic functionalities and security features of the website, anonymously.
Functional
Functional cookies help to perform certain functionalities like sharing the content of the website on social media platforms, collect feedbacks, and other third-party features.
Performance
Performance cookies are used to understand and analyze the key performance indexes of the website which helps in delivering a better user experience for the visitors.
Analytics
Analytical cookies are used to understand how visitors interact with the website. These cookies help provide information on metrics the number of visitors, bounce rate, traffic source, etc.
Advertisement
Advertisement cookies are used to provide visitors with relevant ads and marketing campaigns. These cookies track visitors across websites and collect information to provide customized ads.
Others
Other uncategorized cookies are those that are being analyzed and have not been classified into a category as yet.
SAVE & ACCEPT